Narragansett Bay Commission owns and operates Rhode Island’s two largest wastewater treatment plants along with an extensive infrastructure of interceptors, pump stations, tide-gates and combined sewer overflows. The location of the two wastewater treatment facilities is shown on the map below: 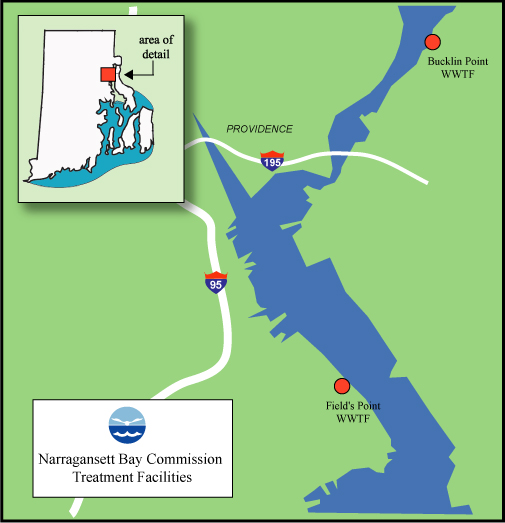 The Bucklin Point Wastewater Treatment Facility was constructed by the former Blackstone Valley District Commission (BVDC), established by the Rhode Island General Assembly in 1947 to service the Blackstone Valley area. State legislation effectuated the merger of BVDC into NBC on January 1, 1992.

The facility provide secondary treatment and nitrogen removal for flows of up to 46 MGD and wet weather treatment for flows up to 116 MGD.

The NBC owns and maintains 30 miles of interceptors and is also responsible for 26 Combined Sewer Overflows in the Bucklin Point Service Area.

Bucklin Point is located at 102 Campbell Avenue in the Rumford section of East Providence. For a map and directions, click here.

Constructed in 1901 and reconstructed in the 1980s, the Field's Point Wastewater Treatment Facility (FPWWTF) provides secondary treatment and nitrogen removal for flows of up to 77 million gallons per day (MGD), and primary treatment and disinfection for an additional 123 MGD of wet weather flows. Total treatment capacity at the FPWWTF is 200 MGD.

The NBC maintains six permanent flow metering stations to measure flow from Johnston and North Providence to the FPWWTF. In addition, the NBC owns and is responsible for 35 Combined Sewer Overflows, 32 tide gates and 80 miles of interceptors in the Field’s Point Service Area. The NBC is engaged in a long-term construction program to minimize overflows from its combined sewers.

Field's Point is located at 2 Ernest Street in Providence. For a map and directions, click here.

The Narragansett Bay Commission has significant initiatives related to nitrogen removal at both the Field’s Point and Bucklin Point Wastewater Treatment Facilities. These projects are required by Consent Agreements with the Rhode Island Department of Environmental Management (RIDEM). The Consent Agreements require NBC to provide nitrogen removal at both Treatment Facilities in order to meet a seasonal (May to October) nitrogen limit of 5 mg/l. Since 2009, the NBC has reduced nitrogen in wastewater effluent by over 50%.

The Biological Nitrogen Removal (BNR) facilities at Field’s Point include modifications to the ten existing aeration tanks, storage tanks and pumps for chemicals to adjust pH and to provide additional carbon, energy efficient blowers to provide more air to the aeration tanks, influent pumps to the aeration tanks, instrumentation to control the BNR process and upgrades to the computer control system. The modifications to the aeration tanks include subdividing each tank into a series of aerated and non-aerated (anoxic) zones to provide nitrification and denitrification. Nitrification occurs in the aerated portion of the tank using an innovative method known as the Integrated Fixed Film Activated Sludge (IFAS) process. In this process, small engineered plastic media are suspended in the wastewater to provide a site for a biofilm to grow on and within the structure of the media. The bacteria in the biofilm convert ammonia to nitrate which is then converted to nitrogen gas in the anoxic zone. Field's Point is the largest application of this technology in the world.