Every spring, the NBC welcomes the arrival of multiple osprey families, who arrive at the Bucklin Point WWTF to build nests and nurture new chicks. The birds take advantage of Bucklin Point’s open space and proximity to the fish-filled waters of the Seekonk River. Since 2015, the NBC has monitored osprey life via video and has shared the images with the public.

History of the Osprey Camera

In 1992, Bucklin Point included an 800,000 square foot landfill site that ran north to south parallel to the Seekonk River. Inspired by the variety of birds and wildlife on the property, the NBC developed plans to close the landfill and repurpose the area as a wildlife refuge. Following the guidelines established by RIDEM’s Facilities Stewardship Plan for Wildlife, the land was revegetated, and a large tract of property was allowed to grow wild.

The NBC installed three osprey platforms, two on the north landfill and one on the south landfill to help encourage the annual return of these majestic birds. In 1996, the Narragansett Bay Commission received Association of Metropolitan Sewerage Agencies' Public Service Award for the establishment of a Wildlife Management Program at the Bucklin Point facility. 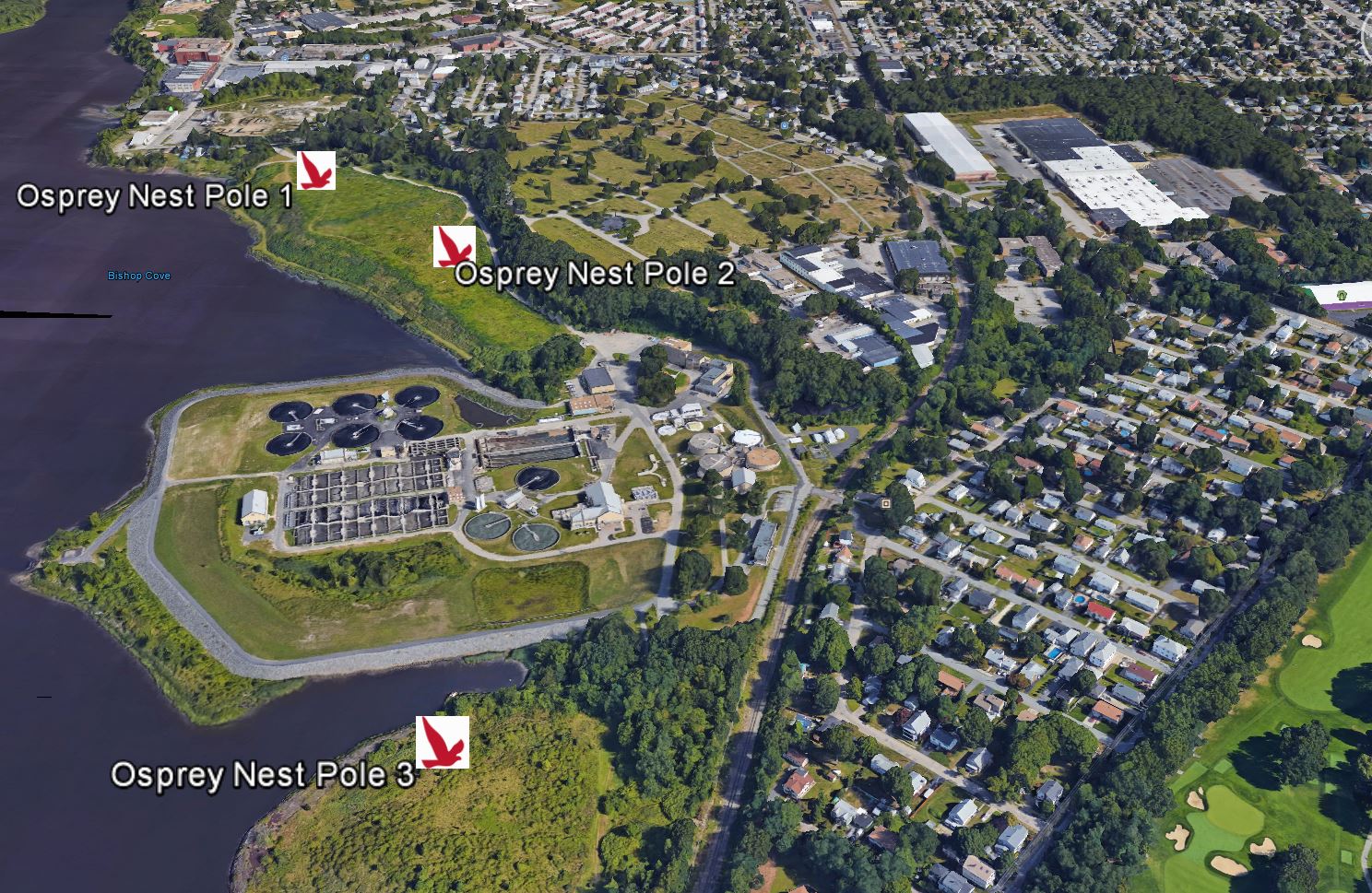 NBC staff have always had a keen interest in the birds and their activities in the nests. Staff would see two birds come in the spring and four or five birds leave at the end of summer. Inspired by other wildlife webcams, in 2015 NBC’s Technical Analysis and Compliance (TAC) section spearheaded the osprey camera project which monitors and records osprey nesting activities at Bucklin Point. The NBC shares videos and photos from the camera to its YouTube channel and other social media platforms so that the general public can get better acquainted with these interesting birds.

The NBC is dedicated to environmental stewardship not only by improving the water quality of the bay and urban rivers through sound wastewater treatment practices but also by utilizing sustainable energy and fostering green spaces for flora and fauna (like the ospreys) to flourish.

The ospreys that return year after year to Bucklin Point are an excellent indicator of a healthy environment. Osprey populations were nearly wiped out in the 1970’s by the legal use of DDT and other harmful pesticides as well as the accumulation of mercury found in the sediment of streams. After decades of environmental reform, osprey populations have experienced substantial recovery and their prosperity at Bucklin Point is a testament to the NBC’s ongoing environmental stewardship.

How the Camera Works

Using off-grid electricity: The osprey platforms are located remotely in a place where a traditional power supply is not available. The biggest hurdle was to power the camera and transmission device. TAC staff found a solution to this challenge with the design of a photovoltaic system. The prototype, developed in 2015, included a modest security camera, a single 100W solar panel, and two deep cycle batteries.

Upgraded photovoltaic system:  In 2019 the NBC upgraded the photovoltaic system to support the power requirements of a new Pan, Tilt, Zoom camera. This camera allowed the observer to maneuver the camera and remotely view the birds in their nest. A powerful wireless access point and antennae was added to ensure a more reliable network connection. The new design boasts 900W from three solar panels, mounted on a portable trailer. Bucklin Point staff built the upgraded PV system while NBC’s Information Technology staff provided network communications. 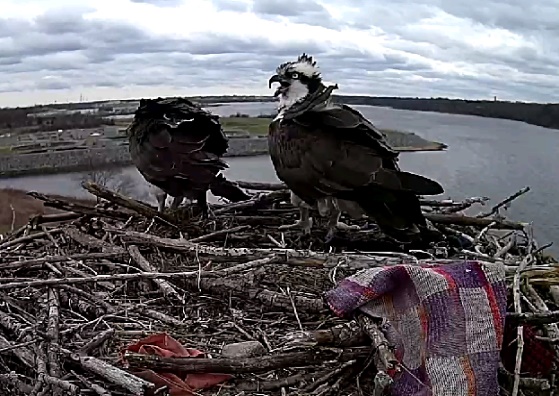 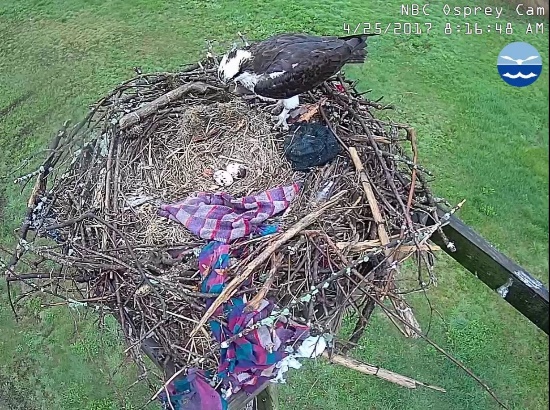 By April 25th, two eggs had been laid. Two days later, a third egg was spotted in the nest. For the next month, the adult female dutifully incubated the eggs and rarely left the nest. 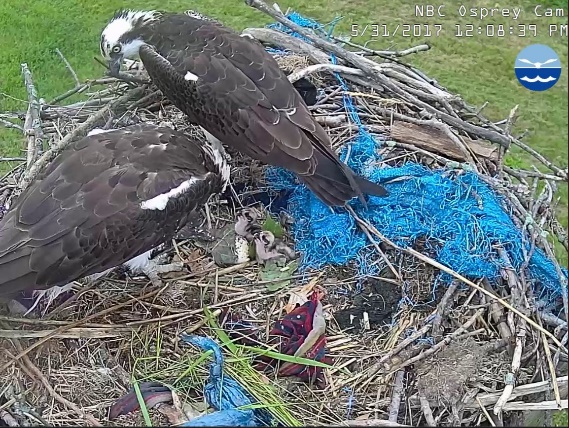 On May 30th the first egg hatched, a day later the second egg hatched! Osprey eggs do not hatch all at once. Both parents contribute to the care of the nestlings. The male primarily hunts for fish and the female feeds the chicks. Watch the first hatching here: https://www.youtube.com/watch?v=kTyq_FyQaq4 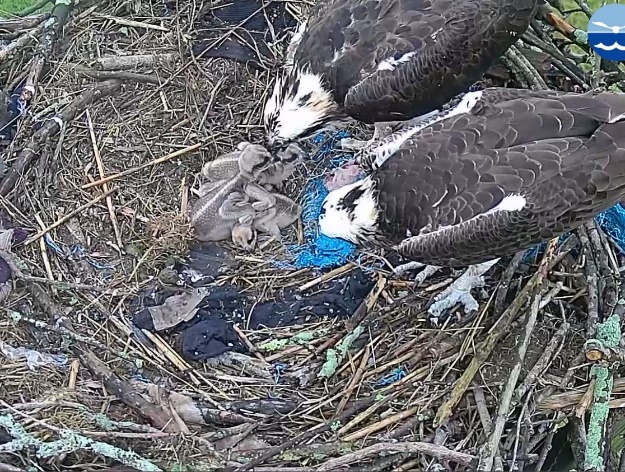 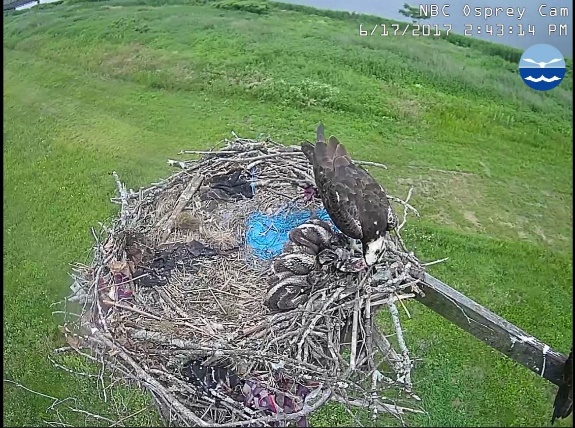 At four weeks old the youngsters could move around the nest as they were able to regulate their own body temperature. Mom kept a watchful eye on the nestlings and relied on dad to hunt and bring back food. 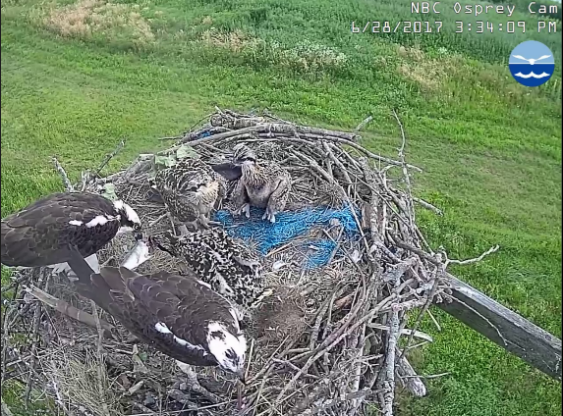 At about five weeks, nestlings moved away from premasticated food, having the ability to digest food on their own. The photo captures the eldest chick in a tug of war with mother. The two younger siblings were still fed by mouth with pre-chewed food. Older nestlings are often aggressive toward younger siblings (particularly at feedings), pecking them into submission. At Bucklin Point, food was abundant, and no significant aggression or dominance was observed. 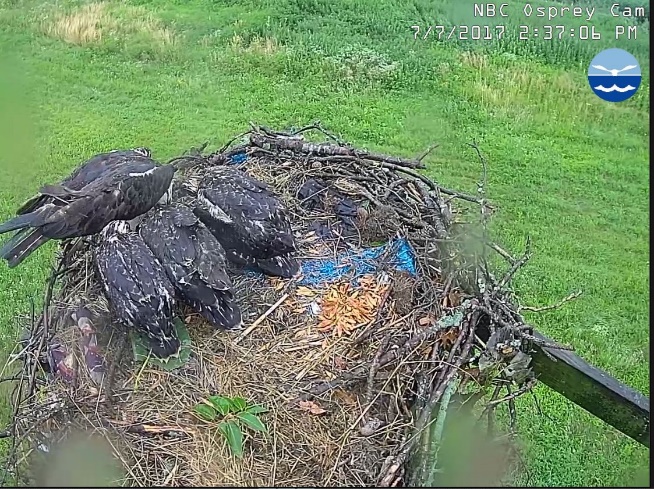 At six weeks old, the osprey chicks were about 90% of their adult size. Chicks focused on growing “flight feathers”, where the down between their feathers disappears and contour feathers on their body grow in. 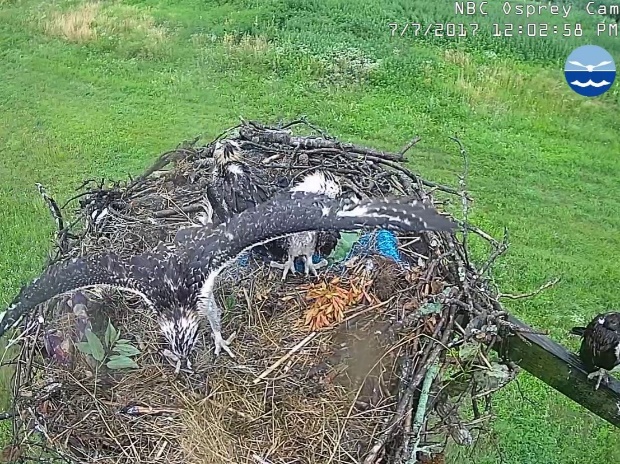 This photo illustrates a typical pre-fledging, or pre-flight behavior. In preparation for flight, juveniles build strength by extending their wings and occasionally trying to flap. They spent a lot of time at the edge of the nest, looking out, anticipating their first leap. 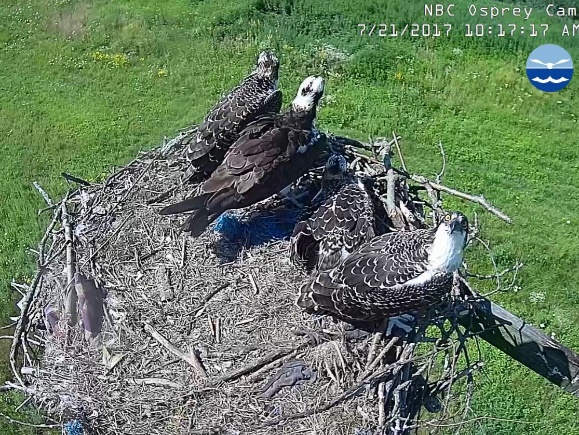 At eight weeks juveniles were almost the same size as parents, but there were still visible differences. Youngsters had light speckling on their brown backs and orange eyes. The speckling, which is buff edging to their feathers will disappear by their first year and the eyes will become yellow by their second year. 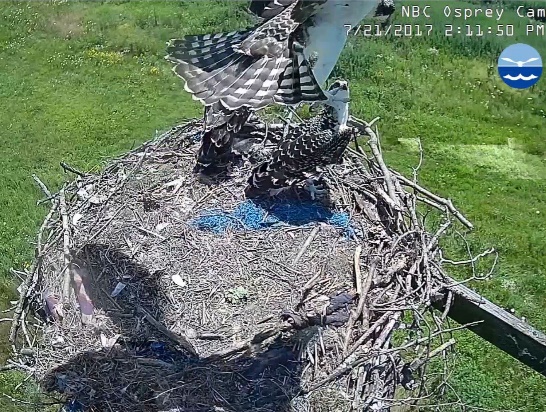 This photo shows one sibling exercising their wings in an attempting to get airborne. The wing flapping increased until they were able to lift a little off the nest, an event called "helicoptering." After a taste of being airborne the juveniles make an attempt at branching. 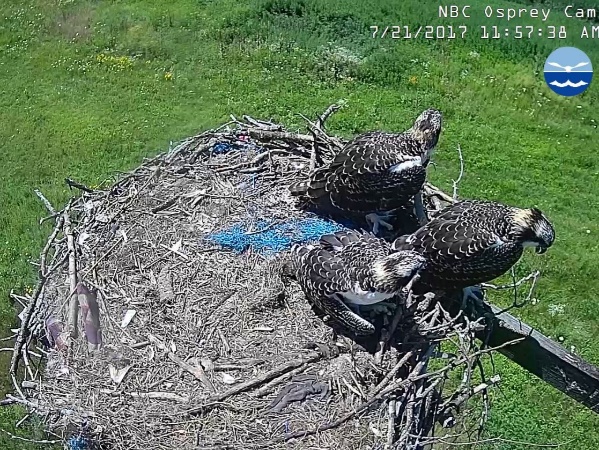 Branching refers to the hopping about and jumping from branch to branch around the nest. The nest at Bucklin Point is built on a man-made structure, so the osprey use a structural post, where they contemplate their first jump. Even though the young were preparing to leave the nest Mom still took the time to make sure all sticks were in order and Dad still provided fresh fish for the family. 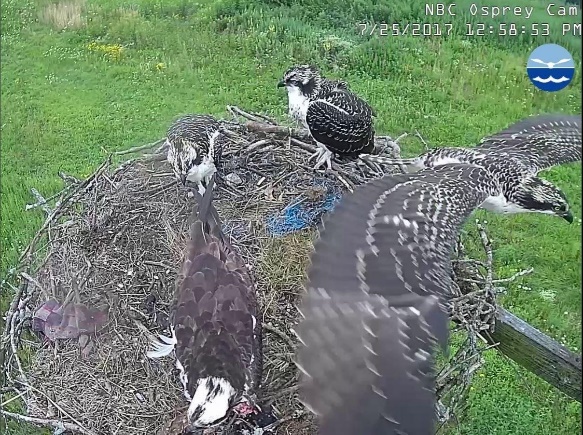 On July 25th, the eldest sibling took first flight. But learning to fly is only half the equation for a young osprey to succeed in growing to adulthood. Fledglings must also learn to feed themselves – outside of the nesting season, as ospreys are typically solitary and hunt for themselves. 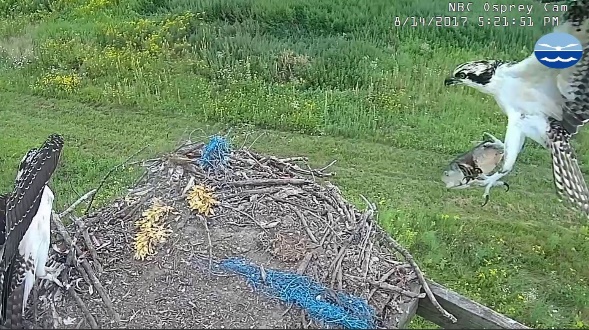 The first documented catch was from the eldest fledgling on August 14th. By the next day, two of the siblings were seen bringing fish back to the nest. 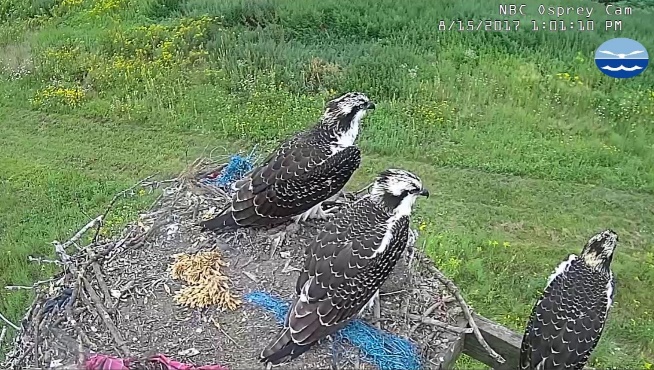 August 15th was the last day the three were seen together in the nest. The two older chicks left days after, while the youngest sibling, with the most distinctive marks on his chest, stayed for another two weeks. 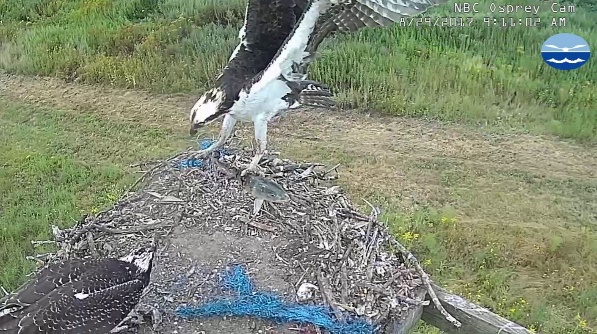 The adult male remained with the youngster and continued to provide fish until last fledgling left for migration. Young osprey make their first migration alone, instinctively knowing where to go without following their parents. They remain at their wintering grounds for two to three years until they return north to make their first attempt at breeding. Osprey return not only to their same breeding area each year, but also to their same wintering grounds.

Many thanks to NBC's Sustainability Coordinator Kerri Houghton and the staff of the Bucklin Point WWTF for the excellent information and stewardship of the NBC Osprey Camera!