With over 400 miles of coastline, it’s difficult to imagine any Rhode Islander left unaffected by the Bay’s benefits. The Bay provides not only aesthetic joys and recreational enrichment, but also an influx of revenues that contributes to the fiscal well-being of our state.

Narragansett Bay is an estuary. This semi-enclosed body of water has free connection with the open sea, and within it, fresh water from land drainage dilutes sea water. Plankton, microscopic aquatic creatures at the bottom of the food chain, thrive in the Bay’s highly productive ecosystem and nourish increasingly complex organisms living in and on the bottom of the Bay, such as clams, quahogs, crabs, lobsters, snails, shrimps, and sponges. Vast number of fish species migrate in and out of the Bay according to seasonal patterns and over 350 species of birds have been spotted in the Bay’s environs.

Prior to the Civil War, southern aristocrats flocked to Newport to escape the heat and malaria of the south. Later in the nineteenth century, the “city by the sea” became an internationally known playground for the wealthy, and other spots on the Bay attracted all levels of society. Jamestown offered seclusion, while Wickford and the casino at Narragansett Pier lured a sportier crowd. The less flamboyant sought out the many coves and beaches to spend a summer holiday or day off from work. In more recent times, the Bay still offers a harvest of delight and relaxation—through pleasure boating, sportfishing or simply lounging on the weathered porch of a Bay bungalow. Commercial fishermen reap a quite different harvest, carrying on a more businesslike relationship with Narragansett Bay and its aquatic inhabitants. Their long tradition of nets and rakes has firmly established Rhode Island as a treasured seafood resource.

As early as the middle 1800s, Providence city engineers recognized the importance of a system of sewage and storm water collection to the public health of an expanding population. Borrowing technology from Europe, workers built Rhode Island’s first sewerage network to collect waste before it entered surrounding rivers. By 1900, Rhode Island had a major wastewater treatment facility at Field’s Point. For several years, the facility seemed like a viable solution to the Bay’s pollution problems. But, developing technology over the last four or five decades began to tell a grimmer story. A closer, more clinical look revealed just how disruptive the population and industrial growth had been to the Bay. But rather than wringing their hands in despair, many people took up the challenge to reverse the pollution in the Bay.

In 1972, in response to growing public concern over the declining health of America’s waters, Congress enacted comprehensive national legislation for water pollution control, called the Federal Water Pollution Control Act. In 1977, the Clean Water Act was amended to the Federal Water Pollution Control Act, setting the basic structure for regulating polluted discharges from industries and sewer treatment plants to national waterways. The Clean Water Act sets national standards for pollution reduction and defines limits that must be achieved by the public’s wastewater treatment plants. According to the Clean Water Act, it is a national objective for rivers, lakes, bays, and other waterbodies throughout the country to be “fishable and swimmable.”

For centuries, Rhode Island has depended on Narragansett Bay as a resource for work and play. Over time, growth in population and industry resulted in an increase in pollution from sewage and other waste. In 1972, the federal Clean Water Act made a cleaner Narragansett Bay a local and national priority. The NBC and many other organizations and agencies are committed to restoring the health of Narragansett Bay through improved technology and conservation efforts.

Today, Narragansett Bay is on the road to recovery. The United States Congress named Narragansett Bay an Estuary of National Significance in 1987, and each year more and more aquatic life call the Bay their home. In the years ahead, water quality in the Bay will continue to improve as a result of the NBC’s CSO Abatement Project, increasingly sophisticated treatment processes, and aggressive pretreatment and pollution prevention programs. 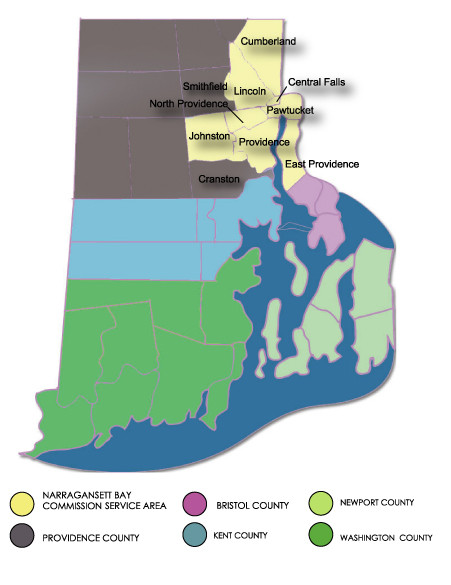