The Narragansett Bay Commission (NBC) is a non-profit public utility that owns and operates the two largest wastewater treatment facilities (WWTF) in the State of Rhode Island: the Bucklin Point (BP) WWTF located in East Providence and the Field’s Point (FP) WWTF located in Providence. The NBC collects and treats wastewater and storm-water from 10 Rhode Island cities and towns, servicing 40% of the state’s population.

In an effort to continuously improve upon energy use performance and to help establish a sustainable energy management plan for the future, the NBC secured a $35,000 EPA grant in October 2005 to conduct investigations into the potential use of available renewable energy resources at both the FP WWTF and BP WWTF. Based on the results of these preliminary investigations NBC applied for and received a $50,000 grant in March 2006 from the then Rhode Island Energy Office to initiate detailed studies into the technical and economic feasibility of using wind power at the FPWWTF and a bio-gas fueled Combined Heat and Power system at the BPWWTF. As a result of these studies, the NBC successfully erected three 1.5 Megawatt wind turbines at the FPWWTF in 2012 and completed construction on the Biogas Combined Heat and Power at BPWWTF in 2018. More information on these projects may be found below. In 2016, the NBC purchased three additional 1.5 Megawatt wind turbines in Coventry, Rhode Island, and in 2017 entered into an agreement with Green Energy Development to construct two 5 Megawatt solar farms.

In addition to its renewable energy initiatives NBC has made great strides toward more efficient use of energy through energy conservation practices, energy efficient equipment upgrades, and the monitoring and measuring of energy use performance. Due in part to these efforts NBC received $275,000 grant from EPA’s 2008 State Innovation Grant Program to work with all of Rhode Island’s 19 WWTFs to develop and implement a statewide WWTF Energy Focused Energy Management System (EFEMS). An EF-EMS utilizes the well-established Plan-Do-Check-Act approach to identify energy efficiency opportunities, implement energy efficiency measures, and monitor and measure energy use performance. 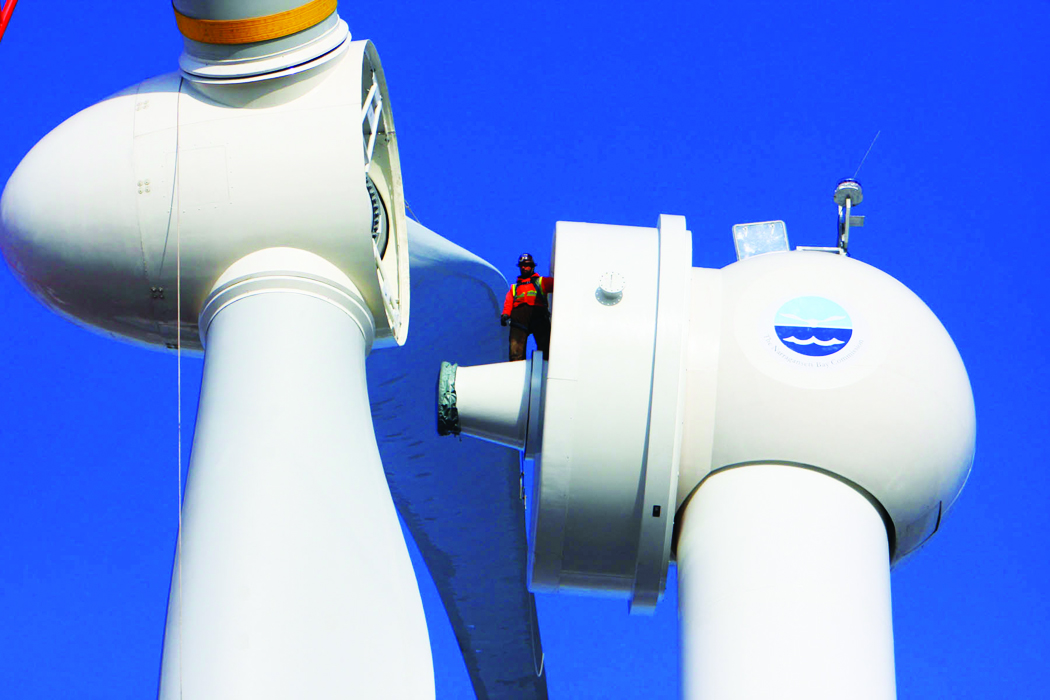 NBC began investigating the use wind energy in 2005 as part of an EPA grant funded project to identify alternative energy opportunities for wastewater treatment facilities (WWTF). This work resulted in NBC applying for and receiving an additional $25,000 in grant funds, this time from the State of Rhode Island’s Office of Energy Resources (formerly the Rhode Island Energy Office), to conduct a detailed Wind Energy Feasibility Study at the Field’s Point WWTF.

In March of 2008 NBC Notified the Federal Aviation Administration (FAA) of its plans to install wind turbines at the Field’s Point WWTF. The FAA regulates the construction/installation of tall structures in the vicinity of airports (the Field’s Point WWTF is approximately 4.5 miles north of the T.F. Green Airport). In July 2009 NBC held two public meetings with neighbors of the Field’s Point WWTF to discuss NBC’s plans for utilizing wind energy. During these meetings the attendees received information on the outcome of the NBC Wind Energy Feasibility Study and were shown a Wind Turbine Video simulating several views of a working wind turbine at the project site. Overall the public has and continues to show enthusiastic support of NBC’s use of wind energy.

In January 2010 after much discussion with the FAA and with assistance from the Rhode Island Airport Corporation, and an aviation consultant, NBC received FAA approval to install three wind turbines each with maximum heights of 360 feet at the Field’s Point WWTF. In March 2011 the City of Providence Zoning Board of Review granted a height restriction variance for these three wind turbines and NBC signed a contract with Gilbane Building Company to begin designing and building what would be the State of Rhode Island’s first wind farm.

NBC estimated that three 1.5 mW wind turbines will be capable of supplying between 35 to 45% of the current electrical power demand of the Field’s Point WWTF, but in practice the turbines have performed even better, often providing more than 50% of the facility's energy needs. The electricity produced by these turbines offsets approximately 3,000 tons/year of carbon dioxide that would have been released from fossil fuel generated electricity. The project was completed in December 2012. 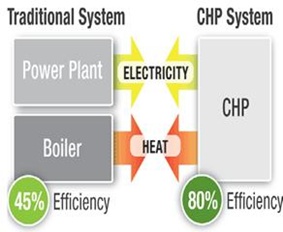 NBC’s Bucklin Point Wastewater Treatment Facility (WWTF) uses anaerobic digestion to stabilize sludge generated through the wastewater treatment process. Anaerobic digestion reduces the volume of sludge and produces methane containing biogas, a renewable energy, as a by-product. Harnessing the energy from the biogas through an efficient combustion process is both economically and environmentally beneficial (methane is a very powerful greenhouse gas).

The Bucklin Point WWTF produces approximately 250,000 standard cubic feet/day of biogas containing 60% methane which is equivalent to the heating demand of about 250 average sized homes on mid-winter’s day. A major portion of this biogas is burned in an on-site boiler to heat the facility’s three sludge digesters. Excess biogas is flared.

Using $25,000 in grant funds from the Rhode Island Office of Energy Resources, NBC conducted a study on how to use this biogas more effectively. NBC’s Biogas Renewable Energy Study concluded that it is both technically and economically feasible to use the biogas to generate electricity and useful heat as part of a 600 kW Combined Heat and Power (CHP) system equipped with a reciprocating engine. A CHP system produces both electricity and useful heat increasing the overall efficiency of the fuel. The NBC estimates that the CHP system will be able to generate as much as 4,000,000 kWh/year of renewable electricity and 23,000 MMBTUs/year of useful heat. This process will result in energy cost savings and an estimated reduction in carbon dioxide emissions of more than 1,000 metric tons (1,100 tons) per year.

Construction on the Bucklin Point WWTF Biogas CHP Project was completed in 2018 and operations begin in 2020.