While the NBC has been recognized nationally for its vast environmental achievements to improve the condition of Narragansett Bay and its contributing waterways, it still must address another significant source of water degradation, the combined sewer overflows (CSOs) in Providence, Pawtucket and Central Falls. 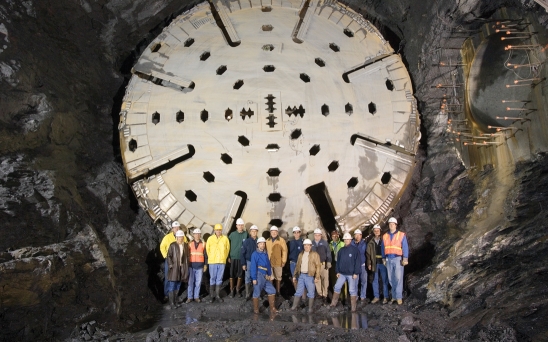 To see the status of CSOs in the Narragansett Bay Commission district, check out this live map.

In March of 1993 after several years of study, the NBC approved a comprehensive Combined Sewer Overflow Abatement Program. The Program proposed the construction of seven underground storage facilities and three deep rock tunnel segments at a cost of $467 million (1992 dollars). The underground storage tanks and tunnels would contain the sewage overflows during rain events so that the stored flows could be returned to the system for treatment after the storm.

The combined sewer overflows into the Bay are a violation of the Federal Clean Water Act. The NBC has entered into a consent agreement with the RIDEM to comply with the Federal Clean Water Act in a timely manner. The RIDEM has waived non-compliance fines, which could be as much as $25,000 per day, per violation, while the NBC works to implement the CSO Abatement Program. The NBC received final approval from RIDEM in July of 1994 of the Combined Sewer Overflow Abatement Program. The NBC then began preliminary design of its "high priority" facilities identified in the program. These preliminary design plans were submitted to RIDEM on January 11, 1996, as required in the consent agreement.

In April, 1994, shortly before DEM approved the NBC program, EPA adopted a national CSO policy which allowed more flexibility in the development of CSO control plans. This new policy allowed plans to be developed based on water quality improvements and offered the potential of reducing the cost of the CSO abatement program, which was the biggest issue raised against the proposed program.

Using this new guidance, the Commission felt it was prudent to reassess its proposed program to determine if a less expensive program could be developed and still meet regulatory requirements. For this reason, the NBC initiated a series of stakeholder workshops in January, 1996 to familiarize key stakeholders with the proposed CSO abatement plan and regulatory requirements to determine if a reassessment was warranted. The 40+ stakeholders represented business, environmental and governmental interests. At these meetings, the US EPA and RI DEM gave the attendees an overview of the regulatory framework that had led the NBC to its currently proposed CSO control plan, and explained the new national CSO control policy of 1994 and how it could affect NBC's CSO planning. Economic impacts of the proposed project were discussed in great length, as well, providing attendees with projected rate impacts associated with the NBC's CSO program and with NBC's existing operations and capital improvements unrelated to the CSO program. The workshops also provided an open forum for the stakeholders to share their thoughts on the project.

On the basis of input received from the stakeholders in June, 1996, the NBC decided to conduct a reassessment of its CSO control program. The reassessment consisted of a review of alternative technologies, water quality standards and goals and a review of the economic impacts of the program.

In February 1997, 16 potential alternatives were presented for consideration by the stakeholders. These alternatives consisted of different mixes of technologies with costs ranging from $68 million to $559 million and with varying water quality improvements. A public meeting was held on April 2, 1997 to present these options and their expected water quality improvement. There were about 25 members of the public in attendance. The major concern raised at this meeting again was the cost of the project and its impact on ratepayers.

After much consideration and discussion, the stakeholders narrowed the alternatives to three options for correcting the CSO problem. The three options were: 1) the NBC's original plan of constructing a series of underground storage tanks and tunnels (Alternative 16); 2) constructing nineteen sedimentation/disinfection facilities throughout the district to provide flow through treatment (Alternative 7A); and 3) constructing six miles of underground storage tunnels, five CSO interceptors, one wetland treatment system and sewer separation of 12 areas (Alternative 17). Louis Berger and Associates, the NBC's lead design manager for the project, conducted a detailed evaluation of the three final alternatives and presented these findings to the stakeholders at the August 6, 1997 meeting.

At the August 13, 1997 stakeholder meeting the NBC also addressed a number of issues which had been raised at previous meetings relative to CSO control. In response to these issues, the NBC agreed to do the following:

Although there was a consensus that only the first phase of the three-phased plan be designed and constructed which should take approximately seven years, the Commission is required by law to present a comprehensive plan to address all three

Alternative 17 was selected because it has the lowest operation and maintenance cost and construction costs are about one-third less than the originally proposed plan. The first phase of Alternative 17 is expected to cost approximately $275 million. This plan also results in good water quality improvement because most storm flows are stored in the tunnel and are provided with a high level of treatment after the storm at the NBC's two existing wastewater treatment facilities.

Due to the small number of facilities that the NBC would have to operate, the system is very reliable and can be easily maintained. Also, because there are only two remote facilities adding chlorine, the toxic impacts of chlorine are minimal. In addition, permit limits for fecal coliform bacteria can be more easily attained with this alternative than alternative 7A.

Water quality improvements based on both sewer system and receiving water modeling, are a reduction in overflow volume of approximately 40% after Phase I facilities are complete and approximately 98% after all phases are complete. Untreated overflow events with the entire plan in place are projected to be about four per year. Shellfishing and bathing uses will be greatly enhanced once the project is complete. It is projected that areas that are now conditionally closed to shellfishing will be closed 50% less in the Upper Bay and 78% less is the lower Bay after Phase I of the project is completed. These numbers will increase to 68% and 95% less, respectively, after all facilities are in place.

Approval of the Plan

The NBC held a public hearing on the draft CSO Concept Design Report (CDR) Amendment in January 1998 and submitted the final CDR Amendment to DEM on April 17, 1998. On May 19, 1999, the RI DEM held a public hearing on its intent to issue a Finding of No Significant Impact (FONSI) for Alternative 17, and accepted public testimony in favor of and opposed to the NBC's CSO Plan. On July 12, 1999, RI DEM issued the FONSI. "This plan reflects many years of hard, thoughtful work on the part of professionals and stakeholders who undertook a careful examination of the very complex and challenging CSO abatement issue," said DEM Director Jan H. Reitsma. "There has been an extensive evaluation of environmental benefits and impacts, as well as alternatives, which indicate that the proposed project will be the most environmentally sound, as well as cost-effective, means to control CSO discharges. Given the long history of planning and evaluation and the quality of analysis to date, DEM strongly believes it is time to move forward and to implement improvements and clean up the urban rivers around Providence."

Reitsma also noted the importance of the stakeholder process in helping to steer the project in a direction that proved to be financially and socially acceptable, as well as environmentally sound. "Public involvement was a key factor throughout the entire CSO evaluation process, as well it should be for a project of this size, scope, and cost," said Reitsma. "I commend the NBC for seeking public input and using this input as guidance in choosing the recommended alternative."

Construction of Phase I was completed in October 2008. The Phase I facilities include the tunnel, tunnel pump station, and seven drop shafts. Approximately 1.1 billion gallons of combined water and wastewater that would have gone straight into Narragansett Bay are now treated at the Field's Point Wastewater Treatment Facility each year.

CSO Phase II Facilities were completed in December 2014. These facilities consist of two interceptors, two sewer separation projects, and a constructed wetlands facility that will reduce the discharge from 17 combined sewer overflows. The interceptors will be located along the Seekonk and Woonasquatucket Rivers and will convey flows to the Main Spine Tunnel constructed as part of Phase I. The Woonasquatucket Interceptor is 16,400 feet long with an 1,800-ft long tunnel adit, and the Seekonk Interceptor is 7,200 feet long.

Phase III facilities as originally designed included another deep rock tunnel through Pawtucket and Central Falls, terminating at the Bucklin Point Wastewater Treatment Facility. In response to the USEPA's recent guidance documents on affordability and integrated planning, the NBC undertook a re-evaluation of Phase III in 2013, convening a group of stakeholders to provide review and input. The project was approved by the RI Department of Environmental Management in 2019. The documents from the stakeholders' meetings are available here.

Construction on Phase III begins in 2021.